Lake Havasu City wasn’t always as it appears today! Our flourishing community and desert playground was once a vast expanse of open desert with the Colorado River flowing through it. The area was once travelled by miners, trappers and even paddle wheel river boats, as well as being home to the Chemehuevi Indian tribe. Lake Havasu as we see it today was formed by the construction of the Parker Dam between 1934 -1938. At 320 feet high (235 feet of which are below the riverbed) Parker Dam is the deepest dam in the world!
During 1940-42 the lake was filled to its capacity of 211 billion gallons of water! 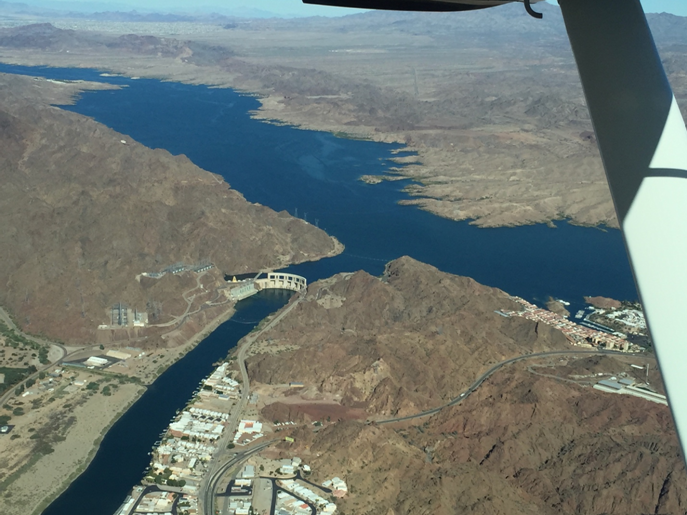 Parker Dam with Lake Havasu in the background.
The first community in Lake Havasu started as an Army Air Corps rest camp, called “Site Six” during World War II. There was even a runway on the peninsula that is partially visible even today.In 1958, American businessman Robert McCulloch (of McCulloch Chainsaw fame) was flying over the Lake Havasu looking for a good place to test his outboard motors. He thought the land aroundthe lake would be a great spot for a new city, so he proceeded to purchase 3,353 acres of property on the east side of the lake along Pittsburgh Point.The peninsula would eventually be transformed into “the Island” with the addition of the London Bridge.

After four years of planning, McCulloch Properties acquired another 13,000 acres of federal land in the surrounding area. Lake Havasu City was established on September 30, 1963, by a resolution of the Mohave County Board of Supervisors as the Lake Havasu Irrigation and Drainage District, making it a legal entity. McCulloch and developer C.V. Wood joined efforts and founded what would be a thriving community. C.V. Wood had previously designed the Disneyland amusement park in Anaheim, California. After four years, a total of 16,520 acres were acquired and prepared for sale.

In 1964, there was only one unimproved road into the city. McCulloch needed a way to get prospective buyers to the new city, so he chose air charter. Between 1964 and 1978, 2,702 flights brought 137,000 potential land buyers to Lake Havasu City in a huge national campaign that targeted mostly people from colder climates. In 1978, the last parcel of land was sold, and the city was incorporated later that year. By 1981, Lake Havasu City boasted a population of 17,000. In subsequent years, the city experienced population growth at a steady flow of about 1,000 people annually. Most came in search of refuge from big cities, and to enjoy Lake Havasu City’s beautiful weather and laid-back lifestyle.

Potential land buyers depart one of McCulloch’s flights in Lake Havasu.
Lake Havasu City’s biggest claim to fame is the London Bridge, which was purchased for $2.5 million from the City of London in 1968. It was shipped across the Atlantic then trucked to Lake Havasu for reassembly.When dismantled in London, England, each stone of the was numbered for re-assembly in Lake Havasu City. The bridge was shipped overseas to the Port of Long Beach, California and then transported overland to Lake Havasu City, where reassembly began in 1968. If you look carefully, you can see the numbering on many of the stones.

Some numbered granite stones are still visible to those with a sharp eye!

The bridge was built as a conventional steel structure, then clad with the original granite to retain its antique look. It was reconstructed on a dry piece of land that was then dredged from underneath, creating Bridgewater Channel and “The Island” across the bridge. It took three years to complete with a construction cost of $7 million 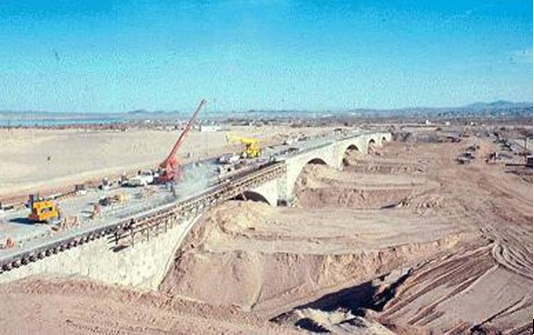 On October 10, 1971, the completed bridge was formally dedicated in a ceremony attended by over 50,000 American and British spectators and dignitaries.